"Action Pad" is manufactured in the United States, the most advanced country in welfare. This pad is made of an exclusive material and has sales achievements in various countries all over the world for more than 50 years.
A public hospital in New York known as an expert in rehabilitation research conducted various scientific and clinical tests on 24 types of pressure relief products including conventional popular ones such as air mat, gel type, sponge type, etc., and as a result Action Pad got the highest score. In the United States, it is rated as the most effective mat for preventing pressure sores on beds and operating tables. In Japan, more than 8,000 clinical data and customer questionnaires have been collected from 1995 up to the present, and it is evaluated as an excellent bedsore prevention equipment in more than 80% of them. It has been introduced in operating rooms and wards located in university hospitals, general hospitals, and long-term care facilities all over Japan.

"Action Pad" is a state-of-the-art pad created by thoroughly verifying countermeasures against pressure and stuffiness from the user's point of view. We packed comfort, durability, and convenience by using an exclusive material AKTON® polymer. We deliver a new proposal which combines technology and humanity to the field of welfare and medical care.

Air mats and low-resilience urethane are typical bedsore prevention equipment, but what these mattress have in common is that they "sink." In western countries, it has been warned for quite some time to use these mattresses without a careful consideration. Because the entire body, as well as hands and elbows that support the body when getting up, sink down and end up being very difficult to move. Then the motivation to move the body is weakened and the muscles are atrophied, which may cause a semi-bedridden person who is able to move even a little on the bed to be completely bedridden.
Moreover, the body bends unnaturally by sinking, which can cause back pain and make it very difficult to change positions, transfer to a wheelchair, or perform rehabilitation exercises. To prevent pressure sores in the future, it is said that patients who have even a little physical mobility must choose the appropriate pressure redistribution equipment that does not hinder their independence.

Pressure necrosis and neuropathy associated with long-term surgery are serious problems not only for patients but also for healthcare workers such as doctors and nurses. Some operations take 2-3 hours, while others take more than 10 hours. In addition, even if the actual operation time is 2-3 hours, it often takes 5-6 hours to recover from anesthesia and to be able to change positions on their own after surgery. It is no exaggeration to say that any disorders caused by prolonged pressure associated with surgery are inevitable including mild ones. Normally, healthy people need to change their positions once every two hours and they unknowingly move even during sleep to avoid stress on the skin. However, patients cannot even do these movements during surgery under anesthesia, so it can be said that it is the hardest environment for them. It goes without saying that doctors, nurses, and caregivers are all working hard to solve this problem, but the fact is that they are not effective enough.

Bedsores are the greatest threat to bedridden patients. Pressure is the first factor of bedsores. Constant pressure on the skin can lessen the blood flow to tissues. If poor blood flow continues for a certain period of time, the skin and nearby tissues are damaged and might eventually die. This certain period is usually considered to 2 hours, but if there is a problem with other factors such as moisture or trauma, it can be said that it is a very dangerous condition even within 2 hours. However, it is extremely rare that patients can be repositioned at least once every two hours at a hospital, long-term care facility, or home. Everyone will do their best for their families, patients, and loved ones, but it is almost impossible to take care of them all the time every single day in terms of money, environment, and caregiver's physical strength. However, even now, the idea that "Pressure ulcer is caused by a lack of love" exists not only in irresponsible outsiders but also in themselves, and it often causes mental distress to caregivers.

Future pressure ulcer prevention equipment must not only relieve pressure, but also be considered enough for the physical mobility of the patient and the burden on the caregiver.

Action Pad, which was developed with deep consideration of the residual function of the patient and the burden on the caregiver, has outstanding stability in addition to basic functions such as pressure redistribution and measures against stuffiness and slippage.
Its stability does not interfere with the physical activity and rehabilitations of patients who use it on beds and reduces the caregiver’s burden of changing positions and transferring to a wheelchair, there by promoting their independence.

For wheelchair users, it not only relieves pressure applied to their buttocks but also absorbs shocks on uneven roads to eliminate anxiety or discomfort and therefore promotes their independence by providing a comfortable sitting.

What is pressure ulcer? What is the role of prevention equipment?

Only this should be known for preventing pressure ulcers

What is pressure ulcer?

Effective prevention of pressure ulcers cannot be achieved without knowing factors and appropriate precautions.
So, what is pressure ulcer? Its factors are intricately intertwined, but the most direct cause is pressure. Constant pressure prolonged on the skin can lessen the blood flow, and the skin and nearby tissue are damaged and might eventually die after a certain period of time. This certain period is usually considered to 2 hours, but if there is a problem with other factors, it can be very dangerous in even less than 2 hours.

It is not uncommon that the developing bedsore can reach the bone, and that would cause the physical and mental damage to the patient badly.

What is the role of pressure ulcer prevention equipment?

The main role of the pressure relieving product is to redistribute pressure and shear force, which are the two main factors of bedsores. It aims to reduce the number of times of postural change normally required every two hours, and to reduce the pain and discomfort caused by pressure on the skin.

The important thing is to choose the appropriate device for the patients’ physical condition. If they can turn over or move their legs on their own even if it takes time, they should use the minimum size as much as possible.

Early use of pressure reliving mattress for the whole body may make you feel uncomfortable, or you tend not to get up or move actively due to the less pain. Also, if you use a thick mat with high cushioning, your body may be sunk and difficult to move. If that condition continues for a long time, it is very likely that your physical strength and muscles will weaken and may lead a shift from a semi-bedridden state to a completely bedridden state.

Only this should be known for preventing pressure ulcers 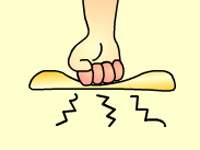 When the pressure sore prevention cushion is placed on a hard table and pushed in with your palm or fist, it reaches the hard part below, which is called bottoming out. This indicates the limit which means that pressure cannot be relieved anymore, so be careful of the cushion that easily bottom out.

When you push the cushion vertically and it pushes back strongly, the pushing back force will be the pressure on you and cause pressure ulcers. That is why it is said that overinflated air mats and ordinary water beds are comfortable just for use in a short period of time but more likely to occur pressure sores after long-term use.

When healthy people choose a pressure reliving product, they tend to choose highly cushioned one. However, it sinks down more than necessary and "hammock phenomenon" occurs, which increase the risk of bedsore because pressure is concentrated on both sides and bony areas of the body such as shoulders, and the surrounding skin is pulled.